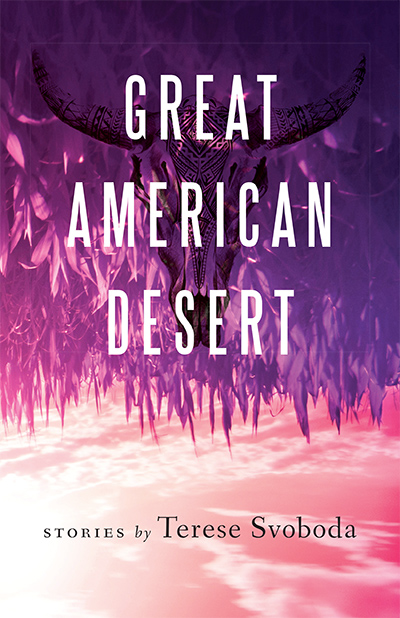 “Great American Desert is a devious and extraordinary new collection of stories from one of our best writers, Terese Svoboda. A kaleidoscopic tour through the Plains that spans decades and beautifully fuses the tonal worlds of comedy, horror, history, and myth. Svoboda is sexy, funny, frighteningly intelligent, and sublimely attuned to the hum of ancient water running underneath our thirsty world.”

“Terese Svoboda has brought a poet’s lyrical intensity and factual density to prose fiction and writes like no one else.”

“It was magical thinking, the merchants of manifest destiny thought, promoting the migration west with the notion that rain would follow the plow, only to open the old sod to a world of dust. Terese Svoboda in her truly miraculous collection of alchemic fictions, Great American Desert, conjures up and turns inside out that landscape of vast wastes, turning it into a teeming ecosystem of understatement. This polished prose is bursting with serrated, smitten, sand sanded sentences that scour and wear us down and down. This is work of sublime sublimation, crazed and cracked to let, yes, the light in. A tome of tornadic abrasion. Read this as a new American Gothic where the endless flatness is not so much broken as broken open into utterly new dimensions. These stories grind gleefully, relentlessly, glacial texts on speed. I’m blown away.”

Author of Michael Martone and The Moon Over Wapakoneta

“A challenging author's take on the most challenging of subjects—the survival of our species from its distant beginnings into the possible future..”

“A beautiful yet ominous portrait of an ecosystem that’s given more than it can sustain, and people who have taken more than they deserve.”

“This is a wonderful, and fiercely original collection for anyone who enjoys fiction in any genre—literary, speculative, horror, romance.”

“A remarkably evocative exploration of an iconic region and its denizens”

“Svoboda's extraordinary imagination and her special gift for the keen observation of the off-kilter, combined with her rich, agile writing, produce in Great American Desert an oracular body of fiction that compels and fascinates.”

“Svoboda (Anything That Burns You) transports readers to a fantastical American West in this collection of stories that surprise, disturb, and amuse in equal measure.”

“In Great American Desert, Terese Svoboda provides an unflinching eye and a sharp take on the interplay between lofty desire and the mundane of the every day.”

“A mélange of personal struggle, longing, and tenderness which left me strangely hopeful for the human race.”

“Great American Desert is an essay in its truest sense: an attempt, a try at describing the feeling of living within late capitalism and its environmental discontents.”

“In her arresting and inimitable style, Svoboda’s deft handling of the complex dynamics of family and self seeps into every sentence of these short stories about what we do to the world around us – and what it can do to us.”

Water, its use and abuse, trickles through Great American Desert, a story collection by Terese Svoboda that spans the misadventures of the prehistoric Clovis people to the wanderings of a forlorn couple around a pink pyramid in a sci-fi prairie. In “Dutch Joe,” the eponymous hero sees the future from the bottom of a well in the Sandhills, while a woman tries to drag her sister back from insanity in “Dirty Thirties.” In “Bomb Jockey,” a local Romeo disposes of leaky bombs at South Dakota’s army depot. A family quarrels in “Ogallala Aquifer” as a thousand trucks dump chemical waste next to their land. Bugs and drugs are devoured in “Alfalfa,” a disc jockey talks her way out of a knifing in “Sally Rides,” and an updated Pied Piper begs parents to reconsider in “The Mountain.” The consequences of the land’s mistreatment is epitomized in the final story by a discovery inside a pink pyramid.