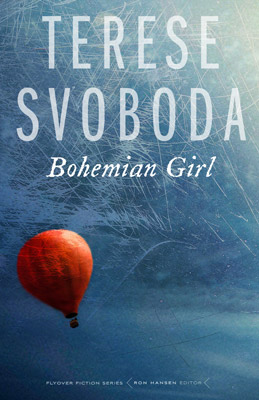 “She will, of course, compared to Willa Cather -- and deservedly so.”

“Creating a western world as raucous and unpredictable as any imagined by Larry McMurtry, and teeming with characters as tragically heroic as those created by Willa Cather, Svoboda offers a vividly distinctive tale of the American frontier.”

“A marvelous heroine with an iron will and a unique voice.”

“Hollywood has handed us an American West of cowboys, cattle, train whistles, and Indian wars, but Terese Svoboda offers a different glimpse of history, from the perspective of a young girl abandoned by her own father to make her way in a world that has mostly cruelty to offer. . . . An eloquent exploration of the Wild West from the perspective of one of its victims who refuses to be victimized.”

Finalist for Foreword's Historical Book of the Year

2011 ForeWord Book of the Year finalist in Historical Adult Fiction

A cross between True Grit and Huckleberry Finn, Bohemian Girl is the Bohemian answer to Willa Cather. Novelist Terese Svoboda lifts the shadows of American history as she illuminates one brave girl's determined quest for self-discovery.