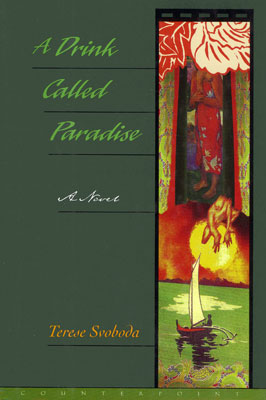 “Svoboda delicately balances a harsh, yet convincing indictment of Western culture with an equally ardent belief in the possibility of human compassion and responsibility.”

“Not a page went by in A Drink Called Paradise when I wasn't stunned by the talent of Terese Svoboda. Svoboda wrote prose so potent in her second novel I'm tempted to go euphemistic and overstate its explosive power and call it atomic.”

“It's sexy, powerful, and surprising. It ought to be sung, not read, and in a low, harsh voice.”

“Postmodernism's heady potential to reinvent language, unclog the doors of perception, and reconceptualize thoughts, feelings, selves and reality is on vibrant display in this demanding, worthy novel.”

“Terese Svoboda has captured a "paradise" that few people want to know about — an isolated, cruelly abused Pacific island haunted by ghosts, castaways, and lost children. A brilliant and beautiful book.”

A Drink Called Paradise tells of the wet, lush decay of an island inhabited by living ghosts, islanders moving in the shadow of bombs that detonated fifty years ago.